Laya Gasa Trek is one of the most fascinating treks among many others in Bhutan. However, it’s considered second to the longest and most arduous Snow Man’s Trek.

The trekking offers a wonderful experience of Bhutan’s diverse fauna and flora, mountain ecology, and wildlife. The first part of the trek till Lingshi follows the same route of that of Jomolhari Trek I. Trekkers on this trek often to get to see the spectacular views of Mount Jomolhari, Jyichu Drake, and Gangchhenta.

If you are fortunate, you will perhaps also sight herds of blue sheep and the Takin. The trek also passes through some of the beautiful highland villages of Bhutan where trekkers can indulge or experience the unique culture of Layaps and their lifestyle. Eventually, enjoy a day rest, soaking the tiredness and fatigue in Gasa’s hot springs. 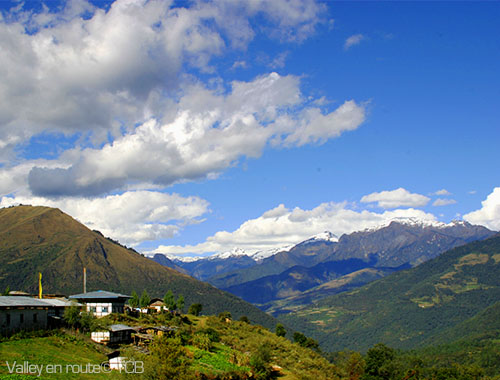 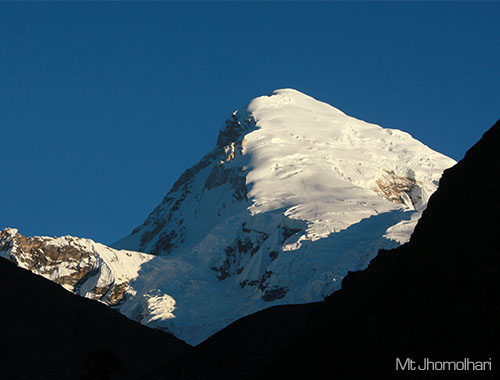 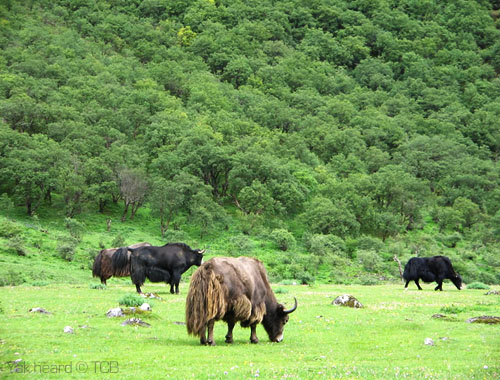 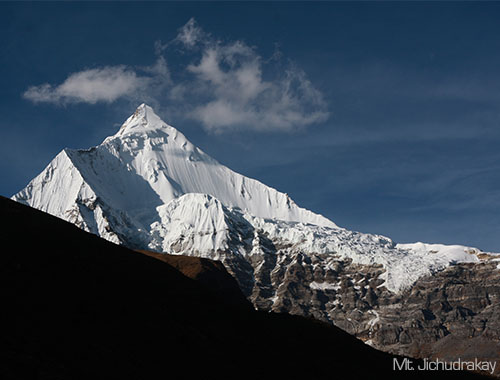 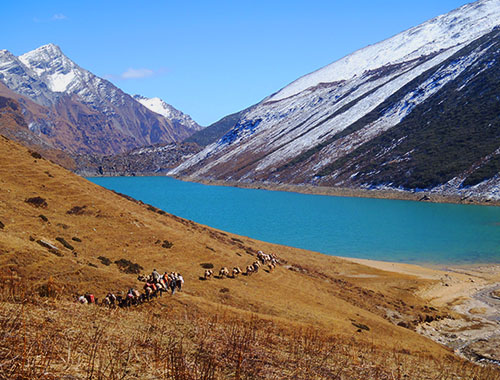 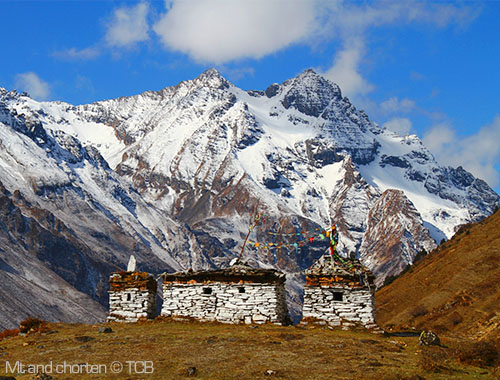 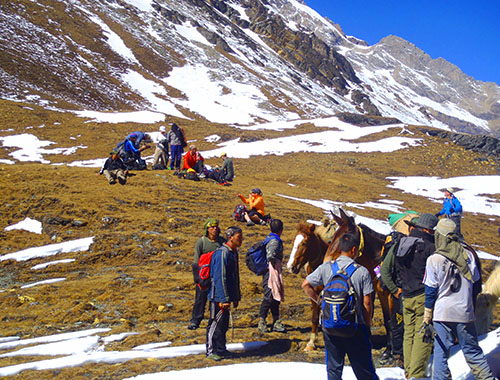 Trekking in Bhutan is both fun and adventure. It often leaves a myriad of experiences among trekkers of the spectacular landscape and breath-taking views of the Himalayas. It’s also a rare and tranquil experience with trekkers having to tread through passes as high as 5,500 m.

Given Bhutan’s rich natural biodiversity, lush meadows, varieties of flowers and birds, the views of high mountain peaks, pristine lakes, lush high valleys, and people in villages and rural settlements living in harmony with nature are other attractions of trekking in Bhutan. The majestic views of the Himalayan peaks and the serene natural environment often leave in trekkers a sense of awe and bewilderment.

While there are different trek packages up for grabs, ranging from a simple three-day Druk Path Trek to the 25-day Snowman’s Trek, Gasa-Laya Trek is both fascinating and arduous. Trekkers on this trek often to get to see the spectacular views of Mount Jomolhari, Jyichu Drake, and Gangchhenta, besides visiting the highland villages of Gasa and experiencing its revered hot springs.

As soon as you arrive at Paro Airport, our representatives would be there to receive and escort you to the hotel for check in.Afterward take a stroll in town, observing shops that concentrate mostly on selling handicrafts and wood products, or even visit some of the cafes and restaurants in town. Next, visit Drukgyel Dzong, now in ruins, and Kyichu Lhakhang on the way back whose origin dates back to as early as the 7th century.

The program on this day includes a hike to Taktshang or the Tiger’s Nest, which is usually an uphill walk of about three hours.

This is expected to accustom trekkers to the trails and mountain altitudes of the Himalayas. The Tiger’s Nest, precariously perched on a cliff, also offer a spectacular view of the Upper Paro valley. The hike also includes a visit to the inner sanctum of the temple, considered as one of the most religious and scared sites in the country.

The trek starts from the road point at Drukgyel Dzong (2,580m), usually a gentle climb along the Parochhu. Trekkers can get glimpses of green meadows, paddy fields and traditional Bhutanese farm houses as they trudge on this trail.

After about four hours of hiking comes the army outpost at Gunitsawa village, where our representatives would submit all the mandatory permits for the trek.  Continue walking to the other side of the river, not far from Gunitsawa, to the campsite.

The trek from Shana to Soi Thangthangkha would be a long one, involving uphill and downhill hikes intermittently.

After an ascending hike through the river valley is the Jigme Dorji National Park. The valley narrows down to a single path and descends to a meadow. This will be the place where the camp would be set as it’s an ideal spot to see Mount Jomolhari on a clear day.

Continue trek early in the morning, across alpine meadow and stunted vegetation, on the uphill trail. Trekkers will also be able to view Mount Jomolhari along the trail. After an army outpost on the way, homes of yak herders and a panoramic view of beautiful snow clad mountain peaks and ridges are other attractions on today’s hike.

The trail will take trekkers through the highland villages of Soe, Takethang and Dangochang, where they would be able to experience the typical lifestyle, culture and traditions of the highlanders. Continue hike till Jangothang, the campsite at the base of the majestic Mount Jhomolhari (the abode of the protective deity Jomo).

Instead of continuing the trek, a day rest is scheduled at Jangothang. A short hike from this place offers a befitting opportunity to see lakes and various other mountain peaks like Jomolhari and Jyichu Drakey.

Trekkers could also take up short hike along trails in the three directions - west for Jumolhari and its subsidiary mountain chains, north for Jyichu Drakey, and east for a number of unclimbed peaks. There are also possibilities of sighting blue sheep in Jangothang.

Continue the trek today. The trail from the camp ascends through a steep ridge for about half an hour, followed by a gradual downhill walk to the Nyilila pass at 4,870m.

Watch the Mount Jomolhari, Mount Jyichu Drakey and Tsherimgang, all above 7,000m from here. Also try to get the sights of herds of blue sheep grazing on the slopes along the trail.

Afterward continue the downhill trek to Lingshi basin, coming across yaks, yak herders and their houses. Trekkers would also be able to see Lingshi Dzong on a clear day. Halt at the campsite before reaching Lingshi Dzong.

Today is going to be an easy day of walking. So trekkers need not worry. After reaching the Chorten below Lingshi Dzong, there are two choices – either to stay on the main trail or take the diversion that leads to Lingshi Dzong (4,220m).

The Dzong sits right on top of a ridge and offers a serene view of the valley. Continue the trek, passing through the villages of Lingshi and Goyul. Juxtaposed to the Chebisa village and a beautiful waterfall, the campsite at this place offers trekkers ample time to visit the village and interact with the communities.

The trail goes through a wide pastureland toward Gobu La pass at 4,410m. Descend to the valley after crossing the pass, and then climb again a little further till the trail descends to Shakshepasa (3,980m), where a helipad has also been built. Continue ascending hike till the campsite at Shomuthang which is located above a river (a tributary of the Nochu River).

Begin early as hiking would be quite tough along this trail. Hike up from the valley for almost two hours until reaching Jhari La at 4,750m.  From here, trying getting glimpse of Sinche La, the pass you that needs to be crossed in the following days of the trek.

View the Mount Gangchhenta (6,840m), also known as the Great Tiger Mountain. Tserimgang and the peak of Mount Jumolhari are also visually apparent on a clear day.

Walk down to Tsheri Jathang valley, considered as the summer habitat of Takin and rightly declared as the Takin sanctuary. Continue ascending hike from here to the campsite at Robluthang.

After crossing Sinche La (5,005m), the highest pass on the route, head toward Laya.  Trekkers will spot Laya women, clad in their traditional attire woven by themselves, en route to this place.

Catch the view of a glacial lake at the foot of the valley and a terminal moraine from here. Continue the descending hike, cross Kango Chhu, and reach the campsite at Lemithang where the peak of Gangchhenta is visible from this spot.

The descending trail continues along a narrow river valley and then leads to a dense forest. It continues again on the west side of the Laya village where one can view Gangchhenta and Masagang. Camp at the site below the school in Laya.

It’s another day off and rest during the trek in Laya. Try to engage in short hikes, making visits to the community school, and meeting Layaps. The interaction would enrich your understanding and knowledge of lifestyle, culture and traditions of these people.

Resume trek today. Follow the trail that winds up and down along the river valley of Mo Chhu, eventually reaching Kohi Lapcha at 3,300m. Follow the steeply descending trail after that to the large stream of Koina Chhu. Camp here for the night.

The hike today would take you to Bari La (3,740m). Follow the descending trail after that to Gasa village, where there is some semblance of modern civilization. Descend further to the Gasa tshachu or hot springs for the night. Dip in the hot springs to get rid of all those tiredness and fatigue.

From Gasa, one can either choose to walk downhill or take a car given some road connectivity to this small town. Or walk till Damji and drive from there to Punakha for the night halt.

In Punakha, visit Punakha Dzong or Pungtang Dechen Phodrang Dzong (Palace of Great Happiness). This massive structure lies at the junction of the two rivers- Phochhu (Male) and Mochhu (Female).

Afterward begin journey onward to Thimphu. En route stop over at Dochula to get a panoramic view of Himalayan mountain range on clear days.

After lunch, stroll the Thimphu city. A visit to the Centennial Farmers’ Market could be perhaps interesting.

Take a tour of some of the important monuments in Thimphu such as the National Memorial Chorten that was built in 1974 in memorial of late Third King Jigme Dorji Wangchuck, the Folk Heritage Museum, the National Library of Bhutan, and the Institute of Traditional Arts and Crafts. Late in the afternoon, visit Trashichho Dzong, first built in 1771 and later rebuilt by the Third King in 1965.

After a stroll in town and visiting some souvenir shops in Thimphu, begin journey onward to Paro for the overnight halt.

After check out from the hotel, our representatives would escort you to Paro Airport for flight to onward destination.