Autumn is not only the best season to travel to Bhutan, it’s also the right time to experience the traditional mask dance festivals or what is locally known as Tshechu. Especially if you want to take a trip to soak in and absorb Bhutan’s rich and enduring religious and spiritual heritage, this is certainly the long awaited, much planned trip. Jump on. Experience the sacred mask dances, spiritual festivities, local cultures, food, and the exceptionally colorful and serene autumn season. Thimphu Festival for the year 2018 is scheduled to held from September 19-21. 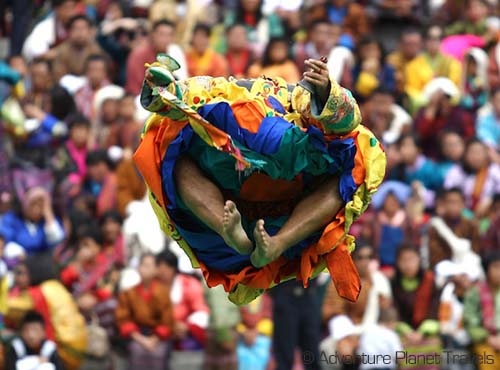 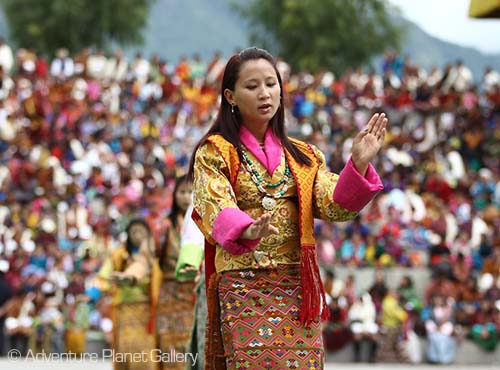 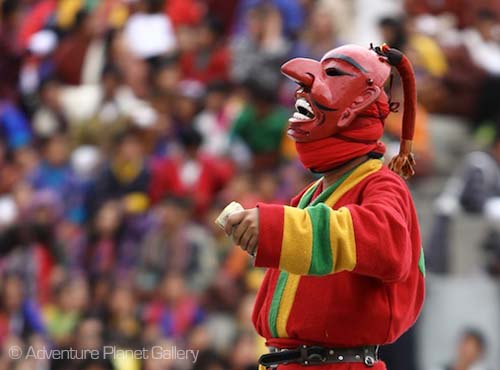 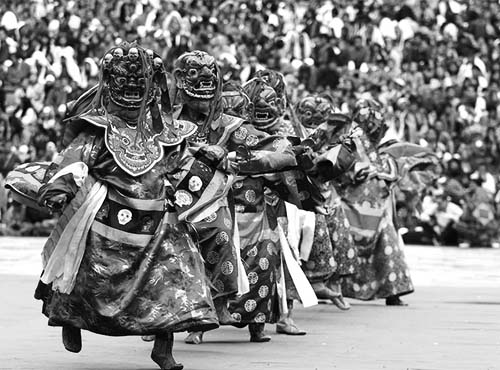 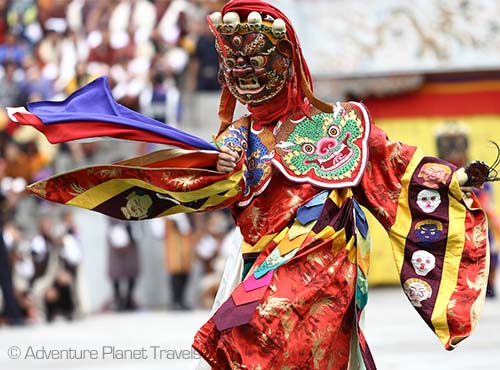 Tshechu is a series of mask dances performed by monks and laymen over a stretch of three to five days in a temple or monastery. The religious festival begins on the 10th day of the Bhutanese calendar. Mask dances are performed to commemorate the life of Guru Padmasambhava and other great Buddhist masters. Tshechus customarily conclude with the unfurling and display of Thongdrel (large scroll painting) of Lord Buddha, Guru Rinpoche, Zhabdrung and other enlightened beings.

Thimphu Tshechu, held within the main courtyard and at adjacent public ground of Tashichhodzong – the seat of the Dragon Kings of Bhutan, is one of the biggest festivals of mask dances in the country that attracts large gathering of young and old people, dressed in their best finery.

The 8-day Thimphu Autumn Festival tour offers the opportunity to experience and enjoy the cultural bonanza at Thimphu tshechu. Add to it the fascinating village hikes, visits to ancient monasteries, fortresses, and temples, traditional hot stone baths, and many more. In essence, you will get to live the total Bhutan experience!

The flight to Paro International Airport is undoubtedly one of the most breathtaking flights over the Himalayan frontiers, offering a rare view of some of the world’s tallest mountain peaks including the Mt. Everest. At the Paro International Airport, your tour guide will receive you and escort you to the main town for refreshments followed by cultural sightseeing at historical Paro Rinpung Dzong and the National Museum of Bhutan or Ta Dzong (Watch Tower/fortress).

Paro Rinpung Dzong is about 10-minute’s gentle ascend from the traditional cantilever bridge called nimizampa. At the dzong, you will visit the main temple and your guide will brief you about its historical significance. At the fort, you will also discover some impressive architectural works on display, ancient mural paintings, and young Buddhist monks.

Following your visit to the fortress, you will take a short hike to the Ta Dzong (Watch Fortress) perched on a hill overlooking the fort and the valley. The Ta dzong houses the National Museum of Bhutan that showcases ancient arts, artifacts and monuments of Bhutan.

You will be served lunch at a local restaurant in Paro. After the lunch, you will take a short excursion to Drukgyel community to explore the ruins of the 17th century, Drukgyel Dzong, which literally means ‘the victory fortress’ built to commemorate the victory over Tibetan forces in the 17th century. On the way back to Paro, you will take a short detour to the sacred and one of the oldest temples in Bhutan, Kyichu Lhakhang, built in the 8th century. This ancient temple, which houses the statue of future Buddha, Jho Jampa, has become a significant place of worship by Buddhist patrons.

In the evening, you can take a leisure walk around Paro town or decide to take rest at the hotel. But remember, the journey has just begun! There is so much to see, so much to experience!

After breakfast, you will be driven to Thimphu. On the way, you will make a brief stop at Tagcho Lhakhang and get to walk over the 13th century iron bridge, first of its kind ever built in Bhutan. At Chuzomsa – the confluence of Paro river and Thimphu river, you will view three distinct types of stupas. From the confluence, Thimphu is just about half an hour’s journey.

After the hotel check in, you will visit Dechenphodrang Monastery, Folk Heritage Museum, the National Institute of Traditional Arts and Crafts and the National Library and Archives of Bhutan. Following lunch, you will visit the 13th century Changangkha temple and then drive to the Motithang Takin Preserve to see the unique national animal of Bhutan, Takin. Later in the evening, you would driven to BBS tower and Buddha point at Kuenselphodrang, to enjoy the bird’s eye view of Thimphu city.

The Thimphu festival starts very early. And early birds get the best spot. We will also drive early to the open courtyard adjacent to the main fortress where the festival is held. The festival begins with the ceremonial procession of monks followed by series of mask dances performed by monks and laymen throughout the day with songs and dances performed o entertain the crowd. Members of the Royal Family and top government officials attend the festivals. Tens and hundreds of local folks, dressed in their best finery, throng the festival. The mood is festive and lively. You can take photos of mask dances, atsara (clowns) wielding phallus, and interact with local people. Towards the evening, you will visit the National Memorial Chorten and witness the customary daily rituals conducted by local people. You can also circumambulate the chorten with locals.

After breakfast, we will drive to the north of Thimphu and hike to the ancient monasteries of Cheri and Tango. These two historically significant monasteries are located on the opposite ridges.  The gentle hiking trail to these monasteries goes through the woods, allowing you to experience nature at its best.

Tango monastery serves as the University for Buddhist studies and many great Buddhist scholars have studied there. Cheri monastery was the residence of Zhabdrung, the founder of Bhutan. Today, the monastery and its surroundings serve as a meditation center for many Buddhist practitioners meditate. After a special outdoor lunch, we will drive back to Thimphu dzong to witness the afternoon session of the mask dance festival.

Today, we will travel to Punakha, a three-hour drive through mixed pine forests, mountain pass and scenic rural valleys. At Dochula pass, where 108 Buddhist stupas have been built, you will be able to enjoy the scenic view of the Himalayan mountain ranges. After driving downhill through serpentine road for two hours, you will reach Lobesa, a small bustling town. From there we will take a short hike through terraced paddy fields to the famous temple of fertility locally known as Chhimi Lhakhang. The temple was built in memory of the legendary divine mad monk, Lam Drukpa Kuenley, known for his unorthodox ways of teaching Buddhism and sexual exploits.

Following lunch, we will drive to Punakha valley and visit the historical Puna Dewai Chempoi Phodrang or ‘the palace of bliss’, located at the confluence of the Pho Chu (male river) and Mo Chu (female river). The fortress served as the seat of the 17the century Buddhist leader, Zhabdrung. The fortress is an epitome of architectural brilliance. Your guide will escort to the inner sanctum and Kuenra.

After breakfast, we will depart for the scenic valley of Kabesa in the north of Punakha and hike toward Khamsum Yuelay Namgyal Chhorten. This 45-minute hike will take you through rural villages, terraced rice fields and pristine natural environment. Khamsum Yuelay Namgyal Chhorten, a unique four-storied temple located on the tranquil hill of Sirigang, houses several Buddhist treasures believed to consolidate peace and harmony across the world. After an outdoor lunch by the riverside, we will head back to Paro for the night.

On the penultimate day of your stay, we will take you to the famous Tiger’s Nest or Taktshang, perched on a precarious cliff at 3,120 meters above seas level. In 8th century, the great Buddhist master Guru Rinpoche is said to have flown to this place riding a tigress, and meditated for three months in the cave to subdue evil spirits. Following the visit of Guru Rinpochhe, several Tibetan Buddhist saints meditated in the cave. Later in 1692, Desi Tenzin Rabgay initiated the construction of a temple at the Tiger’s Nest.

The hike to Tiger’s Nest takes nearly three hours. You can either choose to hike or take a pony. Along the trail, you will experience the natural beauty of the landscape, overlooking the Paro valley. At the temple, you will visit several shrines dedicated to Guru Rinpoche and other Buddhist saints. You can also relax and enjoy the mesmerizing view.

In the evening, you can dip yourself in hot stone bath in a farmhouse followed by a traditional dinner and cultural program.

In the morning, your local guide will see you off at the Paro International Airport.